This is not my typical blog post.  Kristi May Photography has been pretty quiet this year due to COVID-19 so I thought I'd share some photos of what we've been working on at home the last couple months!  Don't judge the photo quality on this post, please! The after photos were all taken on our iPhone so they are far from the professional quality I would normally post. Anyway, back to the loft...

A lot can change in 9 weeks!  It was exactly 9 weeks ago that we were sitting eating dinner as a family when the phone rang. It was the principal of the school where Curtis works, explaining that the board had decided to follow the public system and close the school for the 2 weeks following March Break, due to the coronavirus.  When Curtis told me what the principal had said, my first response to Curtis was, "Let's go to Florida!" :)  Curtis calmly said, "Let's crush the loft."  I thought about it for 3 seconds and then wholeheartedly agreed!!  Little did we know that we would be house-bound in isolation for the next 9 weeks! For the first two weeks Curtis was still working during the day teaching his class online but when the school made the difficult decision to shut down for the remainder of the school year he was laid off and able to work on this project full-time.   It definitely helped speed up the process, though it was a devastating situation for everyone.

The first step of this project began that first night as we did our best to estimate a budget for the loft.  We had been saving for this project and talking about finishing this space for a while so we had a pretty good idea of what it was going to cost and had the money set aside. That was step one. :) Once we were on the same page we began making phone calls to line up different parts of the project.  We had a plumber run the water lines to the bathroom and had someone build the staircase.  We also hired a good friend of ours (shout out to Nate at Wigston Bros Construction!) to work with Curt for several days throughout the project.  He is an expert at all things construction and was a huge blessing to us!  Curtis and I did everything else...well, mostly Curtis. I do all the painting and design decisions and he does basically everything else. He worked many long days and late nights to get it finished and I am so blessed to be married to him (no, he didn't tell me to write that!)

Anyway, I know you all just want to see the photos so here we go! 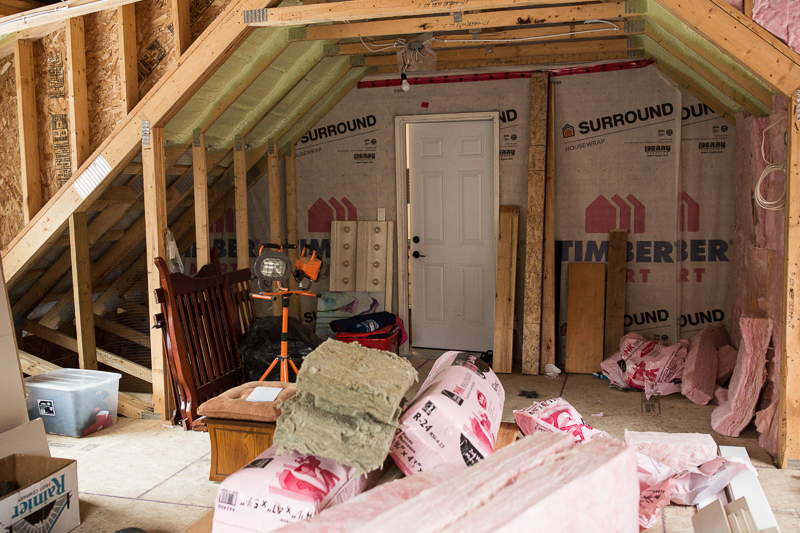 This is the door into Joel's room in our house. Since we intend to rent out the space it will remain locked from the loft but someday we may make his bedroom into an office so the loft will be accessible from the interior of our home. :)   To the left of this door is the new kitchenette and to the right is the bathroom. 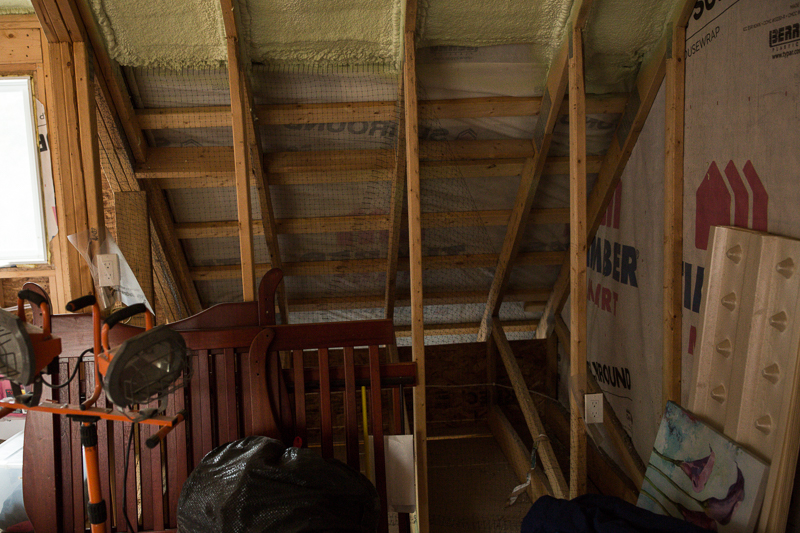 This is a before of the wall that the kitchenette is now on.  Since the loft is built into the truss system of our garage there are lots of different slants and angles to the ceilings...and it's kind of what I love about the space! 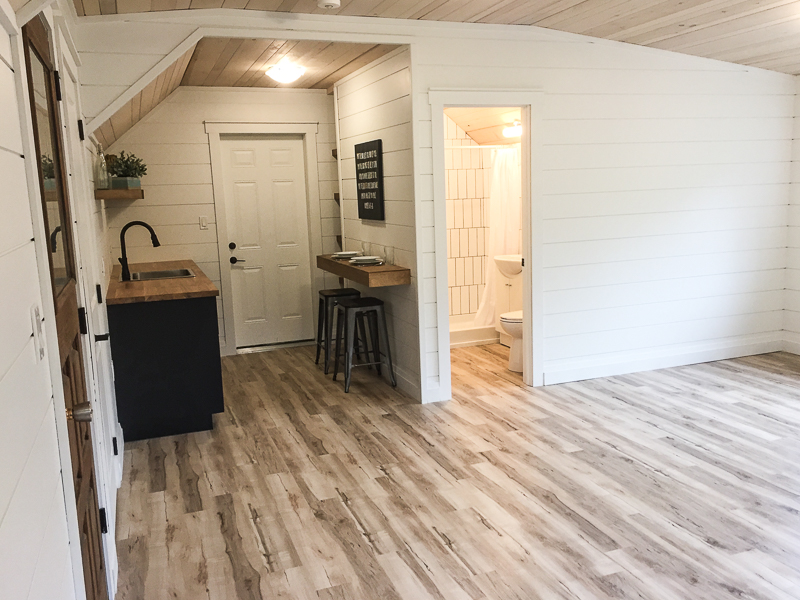 Here is the finished kitchenette space! I am SO happy with it!  The whole loft is wall-to-wall MDF shadow line (i.e. "shiplap") and the ceiling is white-washed pine. Another shout out to Muskoka Timber Mills for all of these materials! I am thrilled with how it turned out!! Curtis made the trim pieces around the slanted ceiling by hand and did an amazing job.  The floors are a vinyl plank from Home Hardware. It was much harder than I thought to find vinyl flooring that I liked, everything was very gray and I like warmer tones. I knew as soon as I saw this finish that it was the one! I love it and it was on sale - win win! 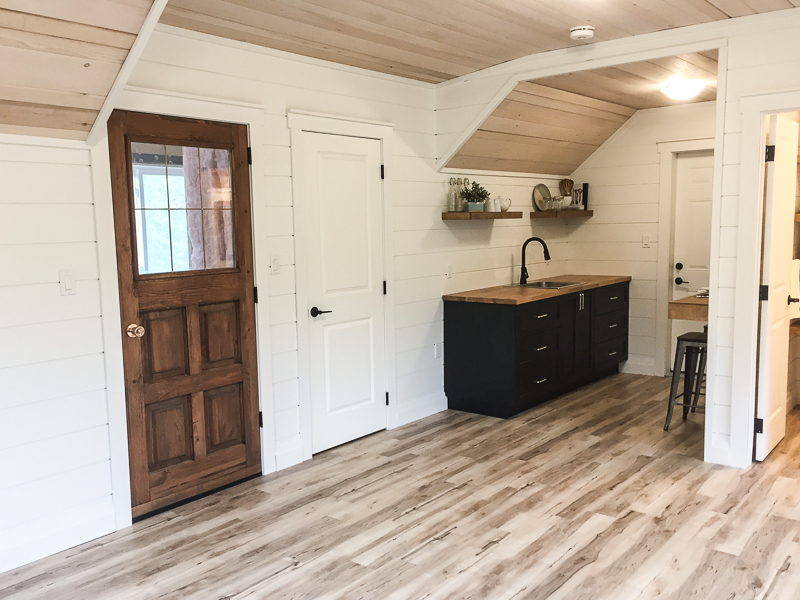 The wood door in this photo is the "exterior" door. It leads to a staircase down into our garage which will serve as the separate entrance into the apartment.  I got the door on kijiji and refinished it. It's solid cedar and has a lovely window that lets in light from the window we had to cover up to make space for the stairs. So thankful we can still let in some of the natural light! The door beside is a nice-sized closet. I forgot to take photos of the interior but it's bigger than it looks! Curtis built some pine shelving and we put a bar in it to so there is somewhere to hang coats/dresses/etc. 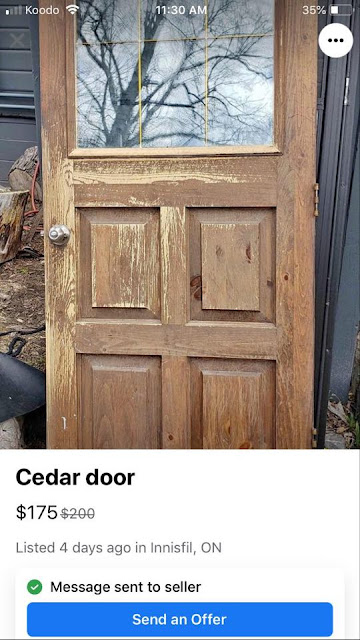 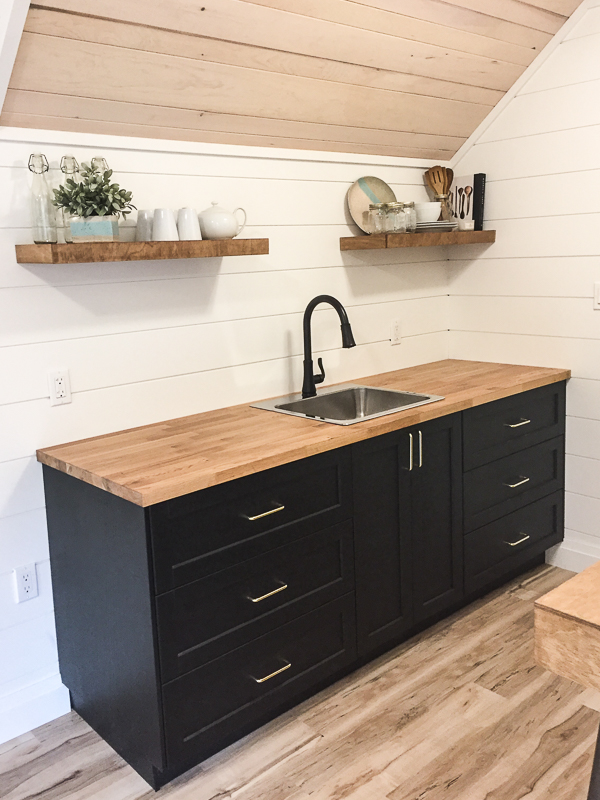 Here is a closer view of the kitchenette. We got the cabinets and hardware from IKEA (we are big fans of IKEA kitchens - this is the third one we've installed!) I'm super happy with the black cabinets! I'm not sure I would go for black in my own kitchen as it shows a lot of dust but I'm really happy with it in this space, especially with the wall-to-wall shiplap. It contrasts really nicely. We went with gold hardware which was a bit of a stretch for me but I love how it turned out, too!  I really wanted an undermount sink but Curtis said no. He doesn't say no to me very often but installing an undermount sink into butcher block is not a simple job and he really didn't want to do it...so we did a classic single basin with the black faucet and I love how it turned out! The floating shelves were a pinterest DIY and I love them!!  We are working on finding a 24-inch apartment size fridge that will go to the left of this kitchenette -if you know of anyone selling one let me know!! Apparently they are a bit harder to find than I originally thought :P For now, we will put a little bar fridge up here until we get a bigger one. 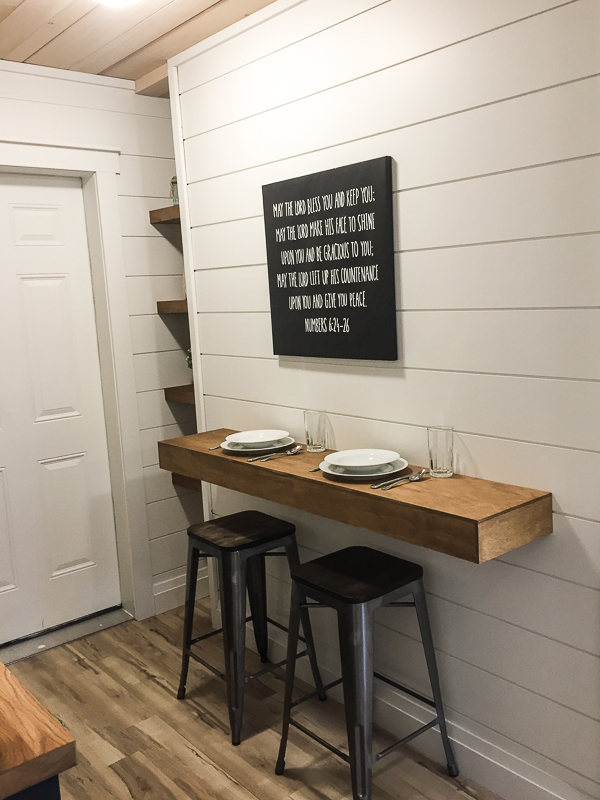 This is a little bar top area that a friend of mine suggested! There is room in the loft to put an actually dining table but I thought this was a great idea for some extra prep space or a spot to eat or work on a laptop, etc. It was another pinterest DIY and I'm super happy with it, too! 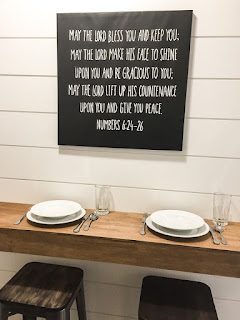 I made this sign for Joel's room but needed something to fill the white space for these photos ;) Isn't it cute?! I painted the black over an old canvas I had from when we first got married. I love these verses and I love this message, maybe I'll have to make another one for in the loft permanently! I also scored these stools on facebook marketplace for a steal of a deal! They match our kitchen stools so now we have a couple extras for when company is over since kids always fight over the stools. 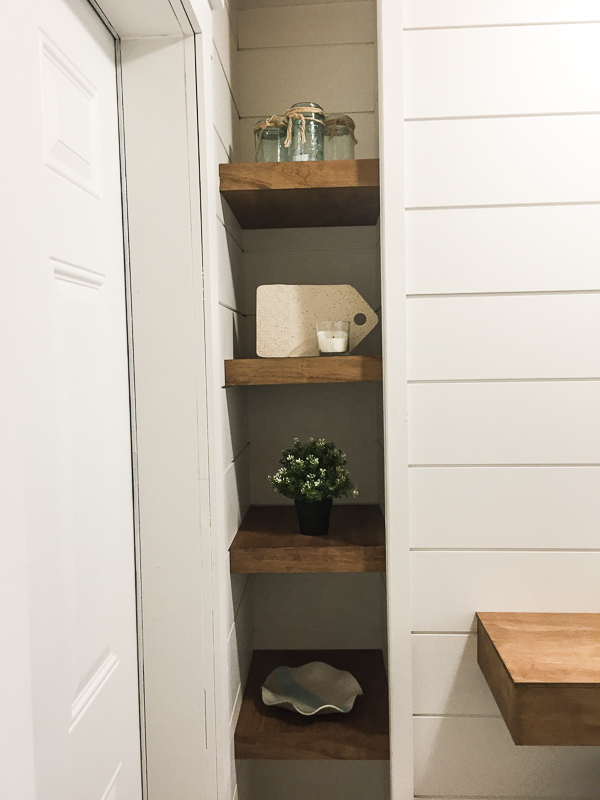 This was originally going to be part of the linen closet open shelves in the bathroom but it would have made them almost 2 feet deep and I felt like it was wasted space.  Instead we blocked it off and added some open shelving as a sort of pantry space in the kitchenette. Another pinterest DIY win! We built ALL the shelves in the pantry, linen, kitchenette, closet, and the bar top in the whole loft for under $150! 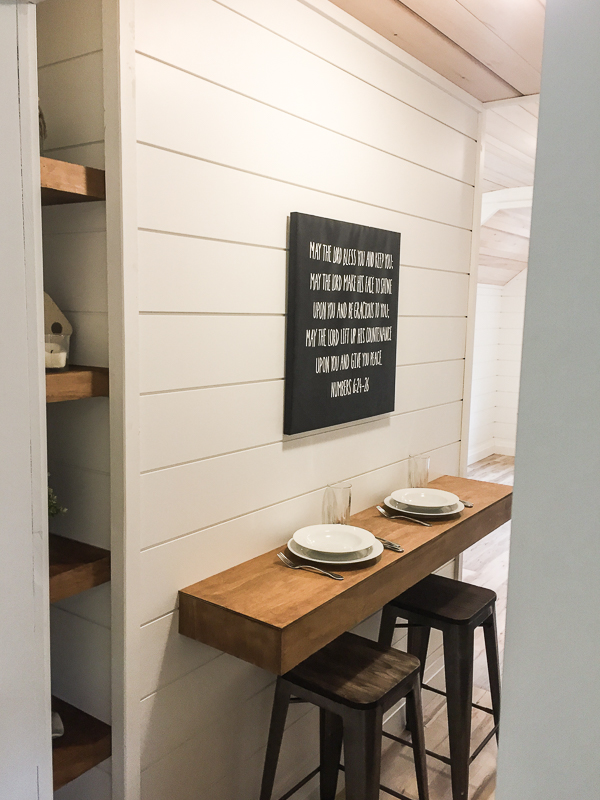 One last view of the bar top/open shelves in the kitchen. This is taken from the door to Joels' room. 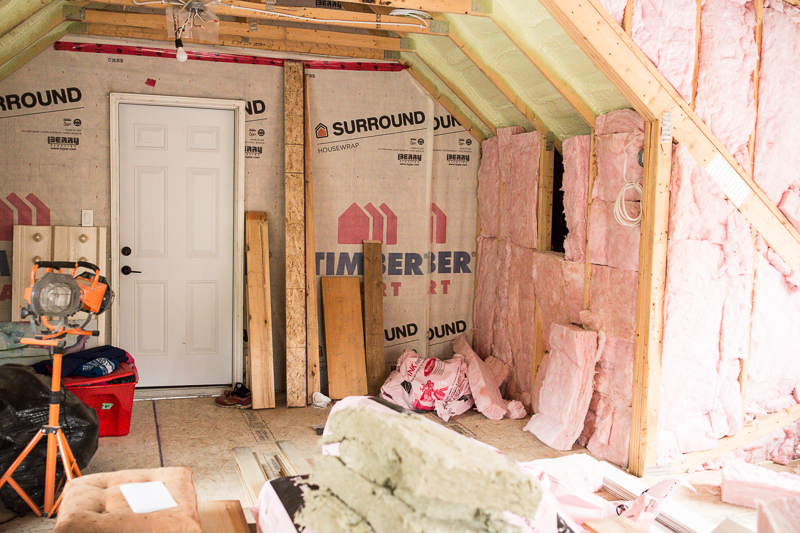 Before photo of the bathroom 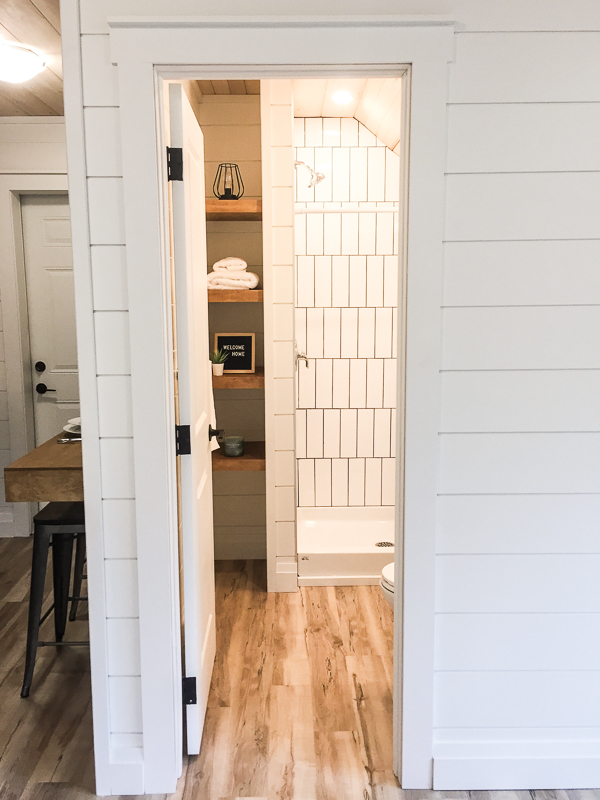 After of the bathroom!! 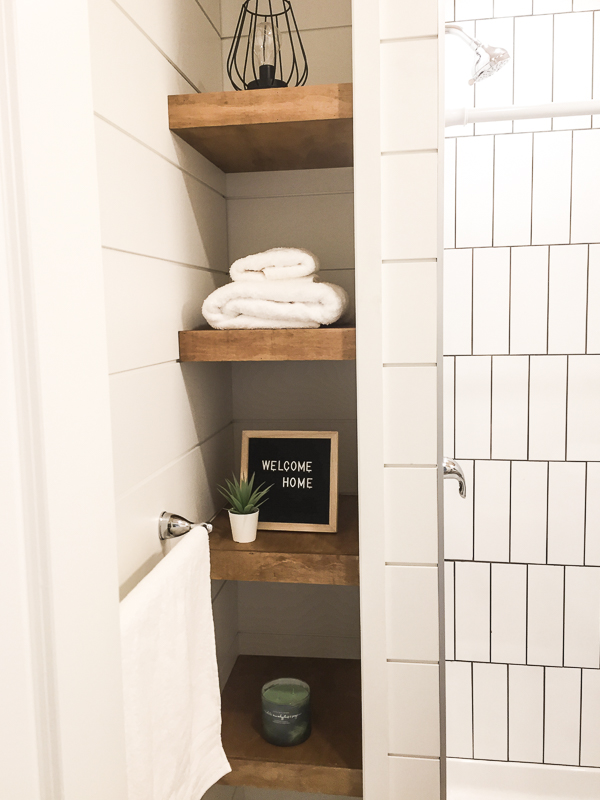 Love how these open linen shelves turned out! It's a pretty small bathroom but we managed to fit in a shower, vanity and toilet. I'm so happy that we squeezed in this shelving for some extra storage. 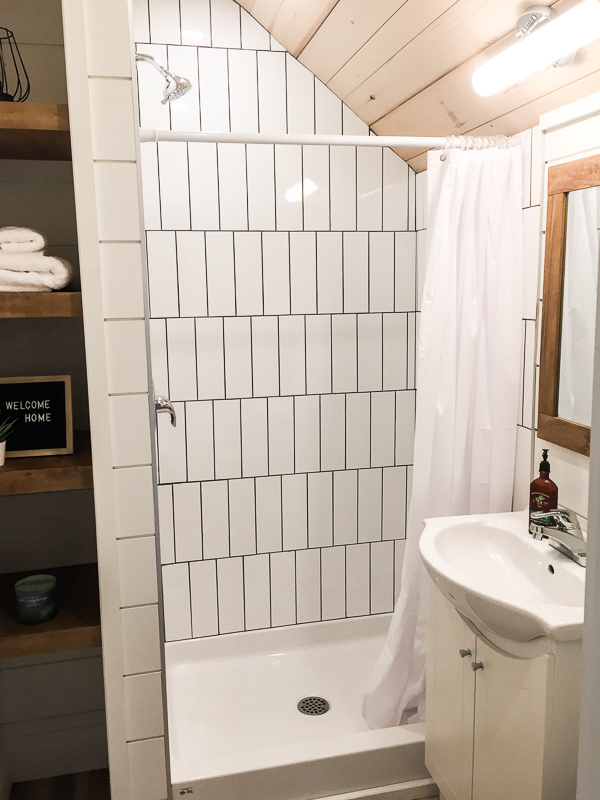 We have always done standard 3x6 horizontal subway tile in our house but I wanted to try these tiles instead and I LOOVE how they turned out! They are 4x12 so they were much quicker to install and we decided to go vertical after I did some searching on pinterest. My sister-in-law pointed out that it makes the space look taller which is great with the slanted ceilings! We went with a dark gray grout (I believe it's called pewter) - same grout as we have everywhere else in the house. We may look into getting a custom glass door cut for this down the road but for now the tension rod and white shower curtain are doing the trick. :) 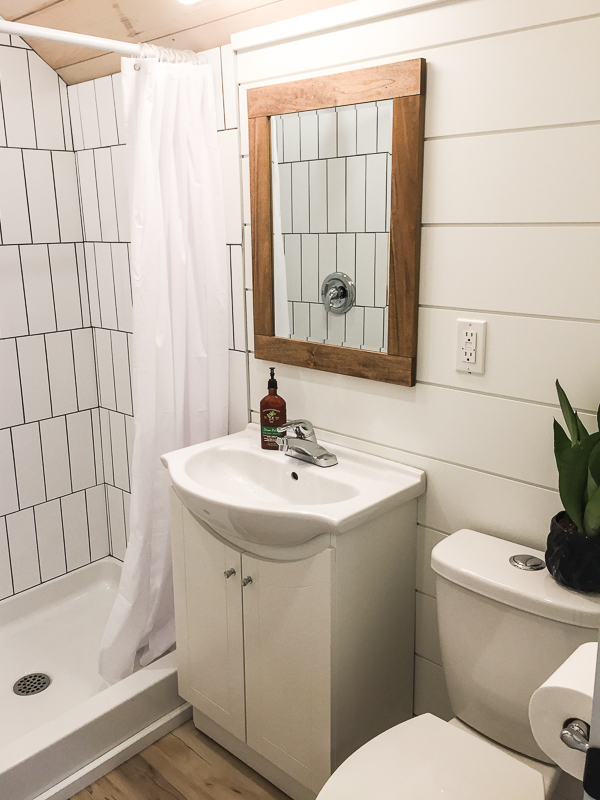 I had originally bought this exact same vanity in gray for the bathroom but then a friend of ours offered us this white one for free and I couldn't say no! I'm actually super happy we went with white since everything else in here is white.  The mirror was originally purchased at Wal Mart and was frameless; however, when I arrived home the "mounting hardware included" was nowhere to be found.  Rather than make a return trip to get a new mirror my sister suggested having Curtis build a frame for it and I love it!! So thankful for my handy hubby. Didn't he do a great job?? I love that now it matches the stain of all the shelving, too. 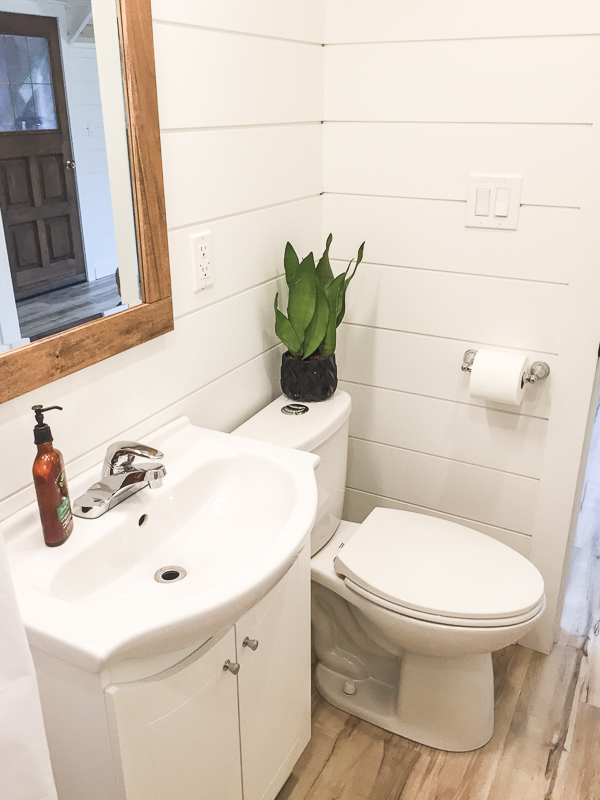 Vanity and toilet. Fairly self-explanatory.  We love Costco's $100 toilets, this is our third one we've purchased...unfortunately I think the price had gone slightly up this time and I think it was $120..  :( 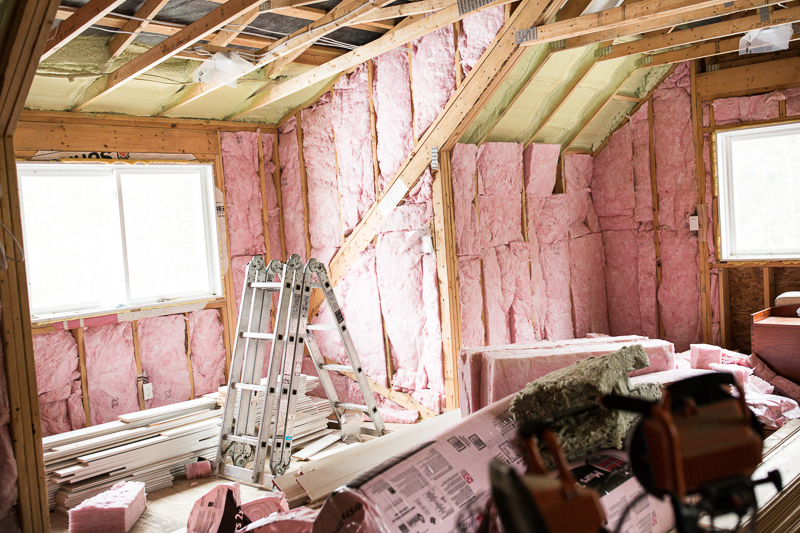 Before photo of the bedroom/living room. 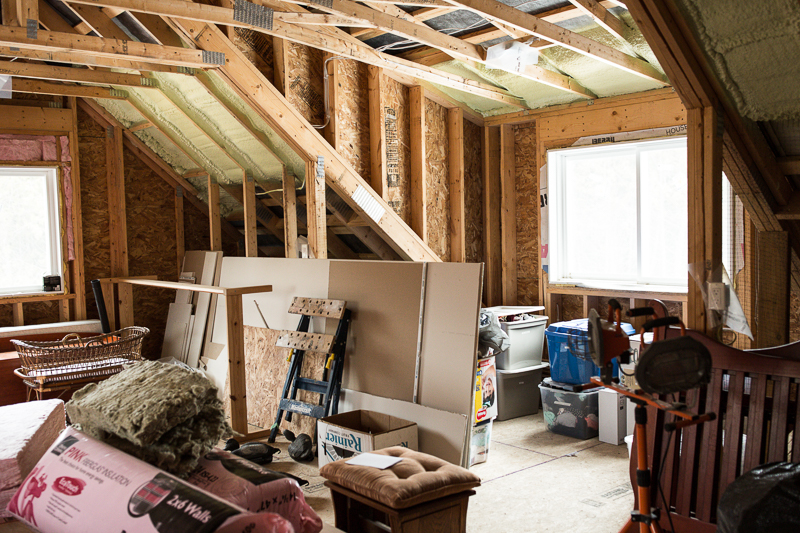 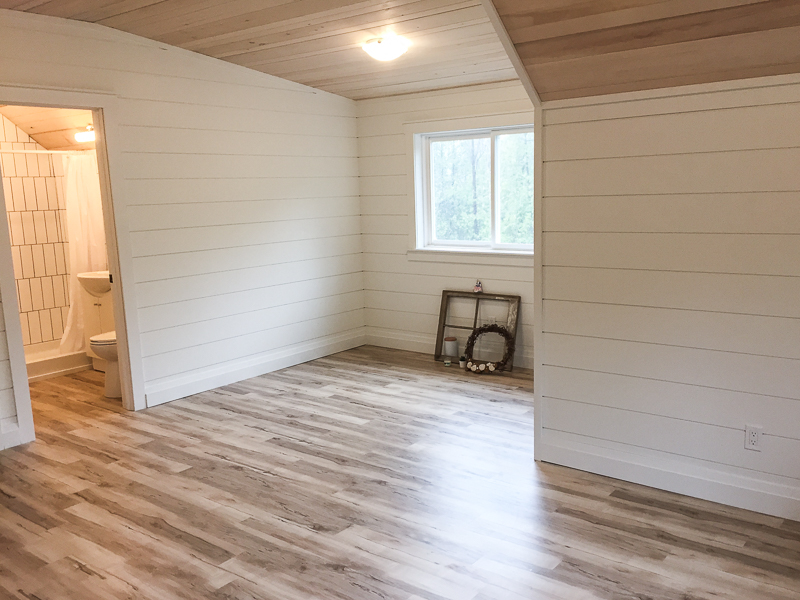 It will be up to our tenant how she wants to set this space up. I really wanted to stage it all but it was really kind of a waste of time since she moves in next weekend! She can decided where she wants her bed and furniture. There are lots of options and I can't wait to see it all set up! 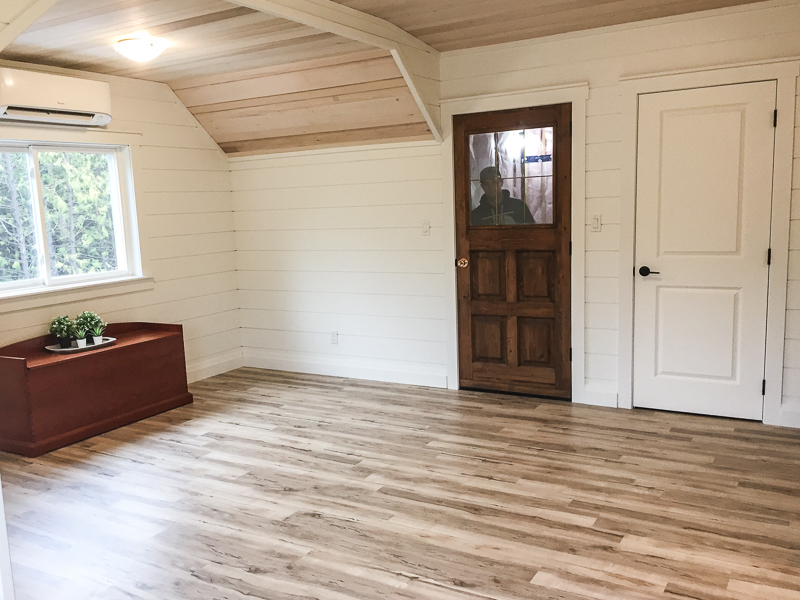 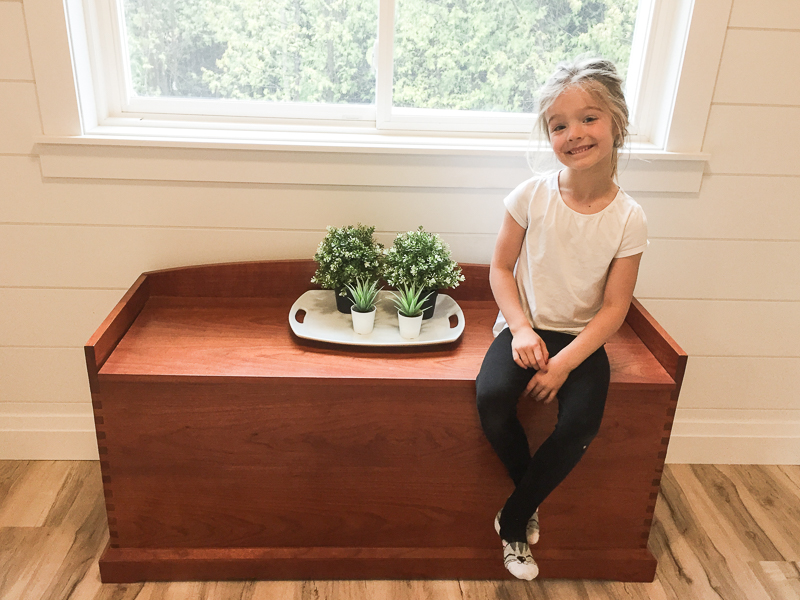 I was having so much fun decorating the shelves and doing a final clean of the space for photos and the girls so desperately wanted to help! At last I relented and let them each decorate a space for photos. This is Lacey's display. Notice everything had to be symmetrical. That's my girl. :) 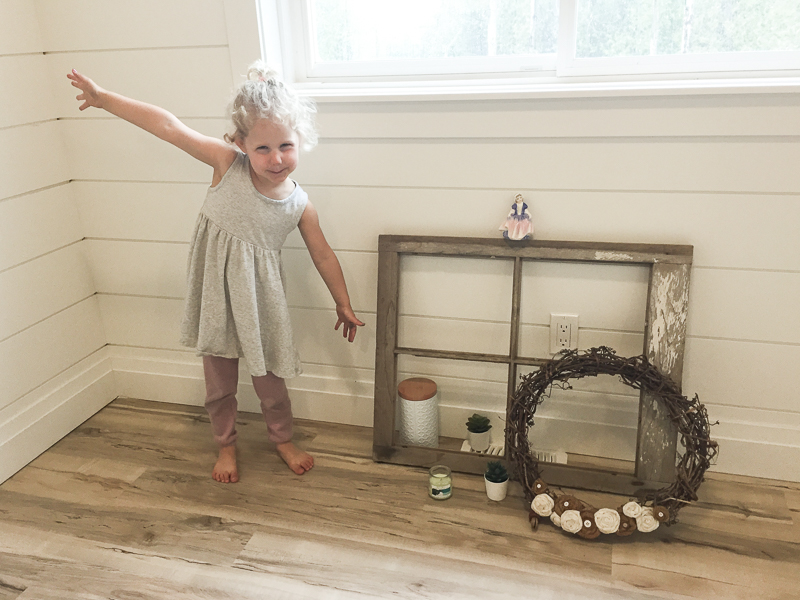 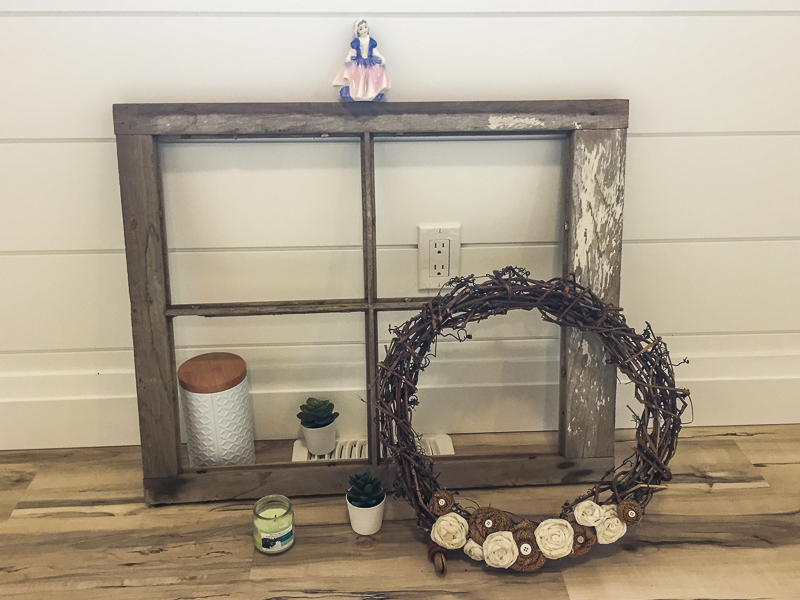 Here is a close-up of Tessa's display.  The Royal Dalton was a gift from her Great Grandmother Dulmage. Seemed a little risky balancing got porcelain doll up on the window frame but that's my Tessa..always living life on the edge. The doll's name is "Dinky Do" which is just my favourite. :P  Please also make sure you note the duck call hiding under the wreath! :P 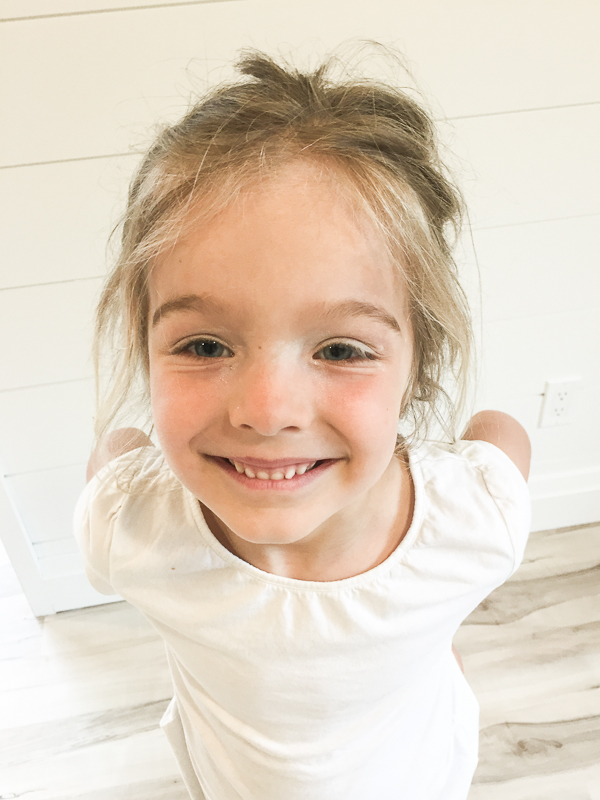 And a close-up of Lacey because Tessa was playing "beauty salon" with her new eye shadow set and did Lacey's make-up for her. Isn't she beautiful?? ;) 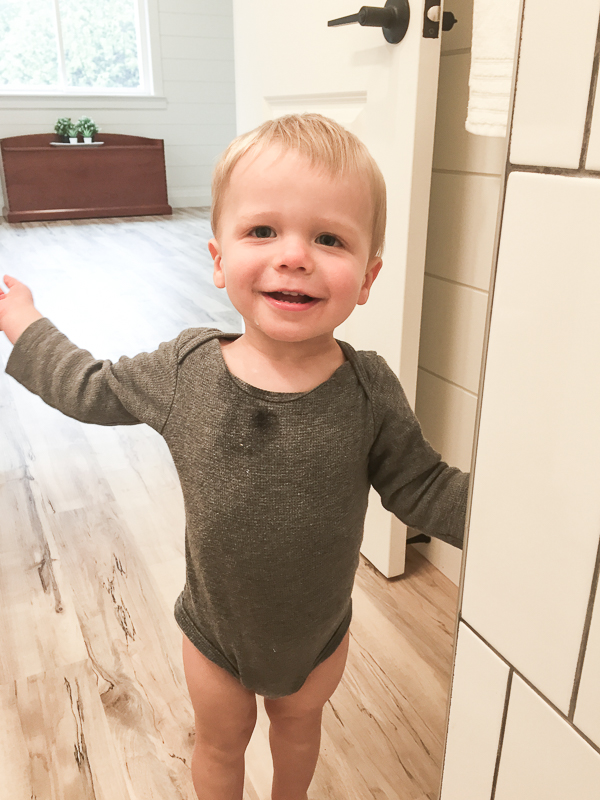 Another little helper while Mommy scrubs the shower base!

Well, that's it! Our new loft apartment, completed in 9 weeks.  I should confess that Curtis still has to drywall the staircase up from the garage but he detests drywall so he's been procrastinating this job all week..hoping it gets done before our lovely new tenant moves in next weekend!  We hope this space is a blessing to her and she is able to make many wonderful memories in our home.  We thank God for bringing her to us at the perfect time and are so excited to have her here!
Posted by Kristi May at 12:09 No comments: